When the draft opinion of the Dobbs case was leaked, we knew it was an effort to intimidate the court. Chuck Schumer, the highest-ranking Democrat in the Senate, stood in front of the Supreme Court and said that Justice Kavanaugh would “pay the price” for overturning Roe v Wade.

Yesterday, a pro-abortion activist has tried to make good on those threats.

A California man was apprehended in Maryland just before he could break into Justice Brett Kavanaugh’s home with a gun. It’s being reported that the man traveled all the way across the country to kill the Justice in his home because of the draft opinion.

Unfortunately, this is not an isolated event. We told you shortly after the draft opinion leaked about our sister organization in Wisconsin that was firebombed and a message left outside that “if abortions aren’t safe then neither are you.”

Earlier this week, a Pregnancy Resource Center in Asheville, North Carolina was vandalized and the exact same message was painted outside in blood colored paint. This pregnancy center has nothing to do with the overturning of Roe and simply exists to serve mothers and save unborn children. 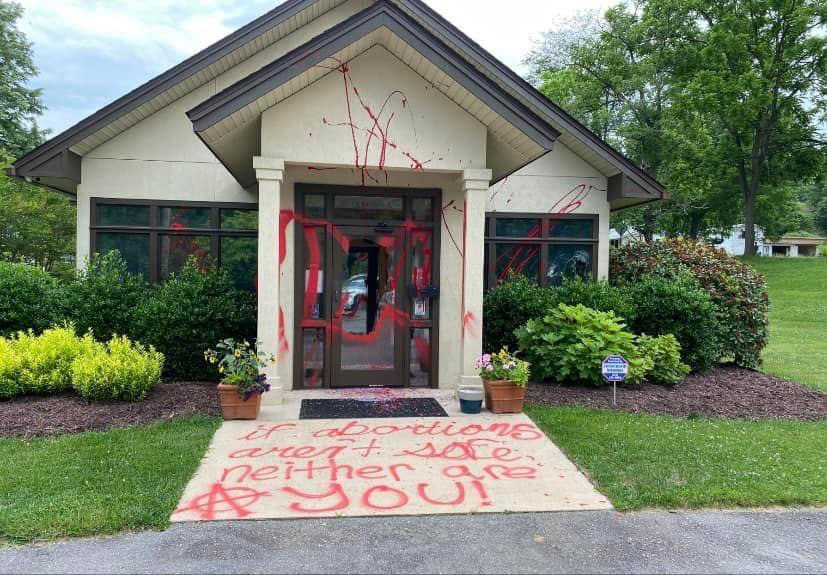 On the same day that the center in Asheville was vandalized, a similar pregnancy resource center in Buffalo, New York was set on fire by pro-abortion activists.  Two firefighters were treated for injuries, and the office was destroyed. These radical and violent activists are lashing out desperately, and we need to keep their victims in our prayers. Pray that God will put a hedge of protection around the members of the Court and the pro-life heroes fighting for children and mothers everywhere.

Also pray for the convicting power of the Holy Spirit to show these violent activists the error in their ways so they repent, turn to God, and turn themselves in.

Things may seem wild and out of control, but none of it catches God by surprise. He is still sovereign over all.